The question we hear most is "Who came up with Bowser Beer? What's your story?"

3 Busy Dogs, the company that created Bowser Beer for dogs, started as a small idea that grew with time.

In late 2007 Jenny Brown created some pretzel treats, now known as Bowser Bits, for a Christmas farmers market.  After signing up for a pet festival, she was inspired by the idea of a beer and pretzel combination.  Unable to find any, she recruited her two-legged and four-legged family to develop and test some samples.  With the four family dogs eager to help taste test, they developed an initial batch which sold out quickly at the festival.  Thus started a journey into researching and developing an all-natural, all-American made product that is healthy and fun for dogs.

3 Busy Dogs was named after watching their three active dogs at play.  The 4th dog, Maggie, was an elderly mastiff who became the face of Bowser Beer on the original labels.  Her picture can still be found on the 6-pack carriers but her image has been replaced by a younger mastiff (isn’t that typical!).  Bowser Beer eventually became the trade name, as it was easier to remember.  Three of these dogs were rescues and we were glad not only to give them a new home but also to find meaningful employment for them. Until the end of their days, they dedicated themselves to provide tasting feedback for all our treats. 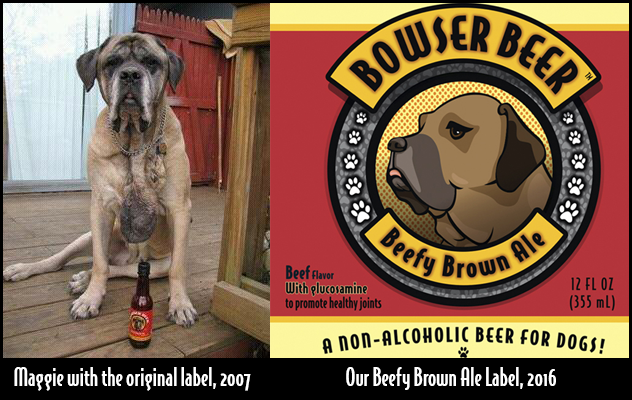 Starting out just in pet shops, Bowser Beer found its way into beer stores, breweries, restaurants, and other retail stores, proving that it’s more than just a gift idea.  From the beginning, we have been committed to using 100% US made, all natural ingredients.  Pet owners have discovered that they can pour it over kibble for their pickiest eaters.   Creative customers freeze it into beer popsicles or pair it with doggie ice cream and watch their dogs enjoy a cool treat.   Along the way, cats discovered Bowser Beer too.  With the original beef, our lineup now includes chicken and pork flavors – always made with USDA human-grade meat.

Making Bowser Beer is a team effort with support from a lot of dedicated people who help produce, promote and pack all the parts needed to make up the line of Bowser Beer products.  Our love of dogs makes us committed to using the highest quality ingredients and maintain strict production standards so you can trust that you are getting only the best for your dog.  Our concern for the environment keeps us committed to using recyclable, US made packaging materials, including our t-shirts which are made from recycled beer bottles.

Currently sold only in North America, but look for more treats and possibly new flavors to come.

By providing a fun, healthy alternative to alcoholic beverages we hope to enlighten pet owners everywhere as to why there is a ‘beer’ just for dogs.

Is your dog drinking responsibly?  The answer is “YES!” when you choose Bowser Beer.