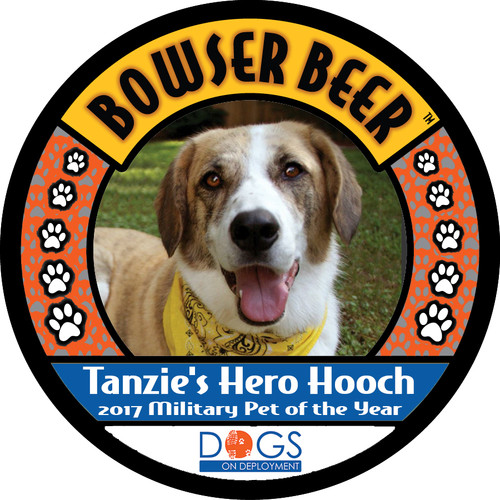 Want to drink your beer and also do good? Now you can add your dog's picture to a charity custom label.

We donate 15% of the sale of the Custom Label 6-pack to the spotlighted charity you choose, and include a special card about the program your purchase is helping for your recipient. We currently feature special Military Working Dogs and Dogs on Deployment labels to choose from - read more about these amazing groups below.

Bowser Beer is a beer formulated just for dogs. Made in the USA with real human-grade beef, chicken or pork, it has no added salt or fat. Combined with malt barley which contains vitamin B and amino acids, and glucosamine to promote healthy joints, you have a delicious brew that is healthy and nutritious. We care about our pets as much as you do, so there is never alcohol, carbonation, or hops in Bowser Beer.

How to serve: Dogs love it chilled in a bowl or poured over their boring, dry kibble. For an extra-special treat, mix with pureed pumpkin and pour over dinner. Your dog will sit up and beg for more! Refrigerate up to about a week if you don't use it all at one time. Each 6-pack contains six 12 oz. plastic recyclable, resealable bottles. Your custom label order will ship out 1-2 business days after your order.

Dogs on Deployment is a non-profit providing a central network for military members to find volunteers willing to board their pets while they are deployed or have other service commitments, making them unable to temporarily care for their pets. No pet should ever be surrendered to a shelter due to a military commitment. DoD exists to help military members keep their pets by alleviating the need for pet relinquishment from military members due to the hardships of deployments.

Tanzie, seen here on this label, was the 2017 ambassador for Dogs on Deployment, and our 2017 Military Pet of the Year.. She is an adorable three-year-old mixed-breed dog who has gone “from street to chic,” barely surviving on the war-torn streets of Sarajevo, Bosnia. Today Tanzie is happy and safe from harm. She and her family, furry brother and sister Benji and Bella, and parents and rescuers Katie and Walker Ward, run The Tanzie Project.

MWDTSA supports dog teams currently deployed in harm’s way, promotes veteran dog handler causes and events, advocates for retired military working dogs (MWD), educates the public and raises funds for War Dog Memorials, among other MWD related objectives. Supporting both ends of the leash since 2006, MWDTSA solicits, funds and delivers goods and supplies into the hands and paws of teams serving both at home and abroad. They have been a valued partner recognized by commands in the Army, Navy, Air Force and Marine Corps.

Sheppy, seen here on this label, has served his country well and is enjoying time with his family.

The Puppy Up Foundation is a national, non-profit, grass roots organization based in Memphis, TN that is committed to discovering the common links between canine and human cancers and the causes of these cancers through comparative oncology research. We raise awareness, educate, and invest in research that benefits both pets and people.  Over 14,000 dogs have attended our nationwide walks for the past 11 years, including 1,300 that have been touched by cancer. 80,000 pet owners have been educated on the early warning signs of canine cancer. That knowledge has helped them be proactive in their pets’ health. Just like in people, early detection results in better treatment options… often less expensive and more successful outcomes too. We want our pets to have as many happy, healthy days with us as possible.

Hudson, seen here on this label, is a cancer fighting superhero (had at least 6 mast cell tumors removed). He has walked over 2,000 miles with Founder Luke Robinson raising awareness of canine cancer. Hudson retired from long walks and like to take lots of naps now!